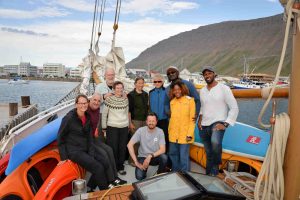 Our expedition began in Isafjordur, a small town of a couple of thousand Icelanders nestled in the West fjords. Our “crew” of paddlers and sailors, hailed from all corners of the world – Finland, Iceland, Australia the UK and the USA.  After a quick kayak fit-out and gear allocation we set off to a nearby fjord for our first night aboard. Taking advantage of the long summer days and the shelter of the fjord, we went for our first paddle in the late twilight on silky smooth waters.
Early the next morning, we took a short stroll on an island traditionally used for farming that now doubled as a bird sanctuary and home style café. The sanctuary has been a huge success and we had to follow a well-defined path to stay clear of the nesting turns and puffin burrows! After our morning tea of home baked cake and fresh brewed coffee, the winds conveniently subsided. We grabbed the opportunity to circumnavigate the island by kayak. While there were lots of birds ashore, there were even more in the water. We spent the rest of the morning paddling amongst rafts of thousands of puffins, Terns darting above and a few lazy harbor seals resting on shore. Our afternoon was spent crossing to Hornstrandir nature reserve, aided by sails and accompanied by the blows of several pods of feeding whales. Some surfacing within meters of our sailing yacht! 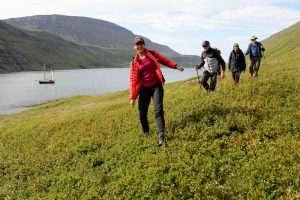 The following day, after some early morning blueberry collecting, we hiked to a high saddle. It was a great way to take in the fresh air, get a glimpse of the open sea and feel the power of the winds that were pummeling the outer coast. For some of our party it was a chance to touch their first snow and we made sure to spend some time playing and sliding on the snow. For the afternoon, we found a nice place for a sheltered paddle and after dinner stroll amongst the remnants of an 1800’s whaling settlement prior to setting sail for Greenland.

A small group rose from their bunks at 1am to help hoist the sails and stand on deck as the captain pointed the bow Westward to Greenland and the open sea. It is a wild and powerful experience to slip out of sight of land with the wind in your sails and the waves beneath your feet. Over the next two days between gazing across the ocean, watching sea birds and whales, snoozing lazily and snacking on home baked bread, we began to find our sea legs and the mountains of Greenland rose slowly from the sea. In the summer months the weather pattern in Greenland is dominated by a high pressure system often resulting in surprisingly clear calm days. True to form, as we approached the coast the wind subsided and the cold air from the Greenland icecap created a bank of swirling fog that gave way to smooth seas and sunny skies as we motored our final miles. 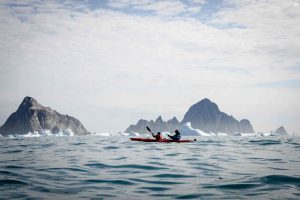 Whales became common in the water as we crossed the East Greenland shelf and we watched them feeding to a backdrop of icebergs and mountains as we entered the calm of the coastal fjords. In stark contrast to the homey feel of Iceland, none of the ship’s crew had visited this part of the coast before. This was true exploration and the captain moved slowly with a close eye on the depth sounder at all times. The Fjord system, a maze of towering granite peaks and ice was a remarkable paddling venue.  We took advantage of the perfect paddling conditions and spent the next two days following our mother ship from new anchorage to new anchorage, each one seemingly more spectacular than the last. If it wasn’t for the constant companionship of bearded and ringed seals, the area would have seemed a lifeless moonscape of rock and ice. The only sounds the periodic grumble of collapsing ice. It came as a surprise to all of us when the captain announced that he had come across an abandoned Greenlandic Settlement. The site was on a spit of land and in all there were the remnants of six stone houses visible. 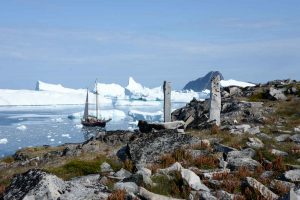 The giveaway had been a collection of narrow upright stones used to store the skin boats out of reach of the sled dogs during winter, poking conspicuously out of the rocks like obelisks. The site, which we later found had been partially occupied up until the 1980’s, contained graves with human remains, an abandoned wooden sled and numerous other artifacts including shell casings and fuel for a kerosene lamp. It was remarkable to walk amongst the layers of history from the ancient to the modern and we trod carefully to avoid disturbing this rarely visited site. All too soon it was time to move South to more familiar terrain. All of us had been moved by the wild and remote nature of this section of the coast. Chatting with the captain he explained that the area was last mapped in the 1940’s using aerial photographs. Inaccuracies on the maps are relatively common and as we stood on deck, motoring to sea he pointed to a large group of islands and said, “you see those, they are not even on the map”.
The following morning we woke in a whole new world. The fjord system was open and the extensive patches of tundra composed of mosses, dwarf birch and numerous flowers made the landscape appear lush. For our first outing we paddled to the head of the fjord and spent time exploring a long sandy beach, Keeping an eye on the glacier until it let go a huge chunk of ice. For our afternoon, we took advantage of some flat ground to take a long stroll across the tundra to a waterfall and lake while the captain and his crew fished for Arctic Char. The fishing was successful and we came home to a full haul of fish prepared in a seemingly endless number of ways including freshly smoked on the captain’s own smoker. 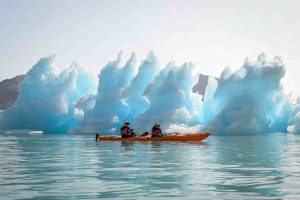 Another half day south, we entered a new fjord system dominated by towering icebergs. We began our paddle after exploring another old settlement with a small modern hut that was now used as a summer hunting camp. Taking advantage of the tidal current, we followed the drifting ice to a virtually hidden lagoon at the mouth of the fjord where our yacht awaited us. We paddled casually, stopping once to watch as an iceberg the height of a three story building disintegrated in front of our eyes followed by a warming tea break. In the final kilometer, we had to leave the calm waters of the Fjord and duck into the open ocean swells before we found the narrow entrance to the lagoon and back to the sanctuary of the yacht.

The next day we motored deep into the fjord system, passing our first inhabited settlement on the coast of Greenland and on towards the settlement of kuummiut. Our objective for the afternoon was to paddle a narrow passage only navigable at high tide through to the settlement of Kuummiut where we would re-group with the yacht. We paddled the fjord system to the narrow isthmus joining jagged peaks on either side. We found our passage but the tide, it seemed, came a little early on this particular day and we got to practice our skills at portaging, watched by a no doubt slightly amused Arctic fox before a final paddle to the settlement.
For our final day of activities we planned to visit Tasiilaq a town of around 3000 people and the “Capital” of East Greenland. On our passage south we were lucky enough to spot a normally elusive sperm whale near the mouth of Tasiilaq fjord. We anchored in the harbor off what seemed to us like a buzzing metropolis. Everyone took a short stroll in town and while some stayed on to explore further, others opted for a final paddle in the bay. The paddlers found some small islands to explore. On the islands we found teams of husky pups, left on the islands during the summer months, tumbling over each other to get a look at us under the watchful eye of their protective mothers before returning to the ship. For our final evening aboard we were lucky to have a local hunter and personal friend of the captain visit and share his stories about contemporary life in Greenland. His life story was a remarkable exposé of a rapidly modernizing country and culture. He had grown up with a father who was raised as a subsistence hunter and who had relied primarily on hunting for survival. Now in his own life, barely over 40, he had travelled internationally, completed a bachelor’s degree in Denmark, was fluent in 3 languages and had served as an advisor to the prime minister of Greenland while still raising a dog team and hunting and guiding on the ice in winter. While not without its challenges, it was impressive to hear how short the time had been between the old life and the new for the people of Greenland.
With our spray skirts still dripping on the deck, we motored to the nearby town of Kulusuk to catch our flight out to Iceland and beyond. From the green shores of Iceland to the icy shores of Greenland (who could resist putting that one in;) our paddling days had been full of stunning landscapes, incredible wildlife experiences, rich history, a glimpse of culture, exploration and of course great food and company. All this and more was no doubt going through the minds of us all as we waved goodbye to our ship and her crew and strolled the gravel road to the rustic airstrip.