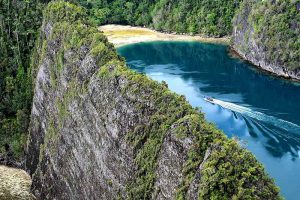 After a leisurely breakfast we were whisked from our hotels in a flurry of taxies to a sleepy jetty then on to our sturdy wooden ship. We arrived under the watchful eye of flocks of Frigate birds and after finding our cabins and going through a kayak brief we lifted  anchor and sail for the Islands of Misool. Steaming south, we enjoyed the view as we passed between the jungled Islands of Salawati and the main Island of West Papua. As the sun set we descended from the decks to enjoy a delicious dinner of local delicacies followed by a short introductory lecture on the Islands of Raja Ampat. 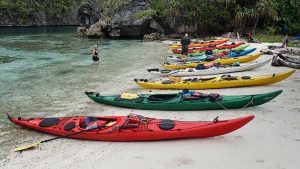 After a restful night at sea, we woke at the southern-most extent of the Islands of Misool. Steep jungled islands of limestone jutted out of the calm waters and distant beaches beckoned. We quickly loaded into kayaks and paddled past mushroom shaped islets, sculpted by chemical weathering to the Island of Karawop. It was the perfect place for our first landing and we were able to snorkel then hike to a small hill-top before returning to our kayaks. Making our way back past the mushrooms in the sea, we crossed to the next island in the chain. We made our first detour into a shallow turquoise lagoon, a pastime that would become all too familiar to us in the coming days.  We then paddled the southern shore, past steep cliffs back to the boat for a well-earned lunch! After our lunch digested, the divers dove amongst the barracuda while the snorkelers floated along the reef edge, overwhelmed by the abundance of life. As soon as we were back it was time to paddle again. Taking a more relaxed approach to the afternoon, we drifted gently around the Island of Wayil, exploring the small lagoons and pockets of mangroves on our first circumnavigation. A small party ventured out to sea to an unusual island, covered in a single species of tree, before we all returned to the ship for a refreshing beverage and another delicious meal.

For our first paddle of the day, we set out on what would be our longest, and most southerly paddle of the trip – a full circumnavigation of the island of Wayilbaten in the Ceram sea. We came across two previously unknown sea caves full of bats and stopped on a small beach to snorkel the spectacular passage between the Islands of Wayilbaten and Walib. We returned to the ship and began our slow journey northwards. We began our second paddle of the day beside the Island of Segaf. We moved slowly through the many lagoons and hidden corners, making sure to explore very nook on our relaxing afternoon paddle. We found a small beach with just enough sand to land on to enjoy a snorkel around a nearby island before returning to our waiting ship.

We woke beside the Island of Balbulol, a towering maze of limestone and turquoise lagoons. While the divers took the morning “off” to dive steep walls, the rest of us explored the western Island of Balbulol. We took advantage of the calm waters to try our first experience of snorkeling directly from our kayaks not once but twice! Our first snorkel was along an exposed reef edge and the second in a sheltered lagoon, only just accessible with the low tide. The species variation between the two locations, although only a short distance apart, was remarkable. The lagoon was an ideal location for delicate corals and the more open area full of large fish. We were all on the water again for our paddle through Eastern Balbulol. It was a spectacular setting for our afternoon paddle, with everyone posing for a portrait or two in one of the more stunning lagoons we came to. It was also a special paddle for many as we finally wound down into the pace of the islands and, through Dan’s guidance, reflected on our good fortune to be in one of the world’s truly special corners.

Our morning paddle began at the eastern end of the Island of Wagmab. Our objective for the morning was to find our way into a hidden tidal lagoon then hike into a cave. With the moon full, the tidal variation was big and we stopped just shy of our lagoon to snorkel while the water rose. After our wait, there was just enough water to carefully navigate our boats into the hidden lagoon and scramble into the mouth of the cave. With our head torches on, we did a circuit into the belly of the island, passing piles of shells by the mouth of the cave, almost certainly the remnants of ancient past meals. After another scrumptious lunch we wound our way along the Island of Lemfakal. There was a subtle change in the landscape, with shallow turquoise lagoons giving way to sheer cliffs covered in rich green vegetation dropping into deep water. We paddled slowly along the coast sending the “blue menace” to investigate the hidden nooks of the island. While some stayed on to enjoy another snorkel from the kayaks, a small party returned to the ship with one of our party demonstrating his finely honed self-rescue skills during a paddling interlude.

The winds had risen during the night and the seas were up, forcing an early morning re-location of the boat. With the winds strong we used the speedboat to transport us to jellyfish lake. An isolated tidal lagoon full of thousands of stingless jellyfish. It was a surreal experience being suspended in clear water and gently brushed by semi-translucent (and remember stingless) jellyfish of all sizes. We mused on the stories held by the locals on the creation of the lake before hiking out, but not before leaving a small sacrifice to the jellyfish gods.  With the winds still up in the afternoon, only a hardy few chose to paddle. Setting out from the boat, just as a small squall moved across the bay, they braved waves, currents and wind on an exhilarating paddle in the elements! 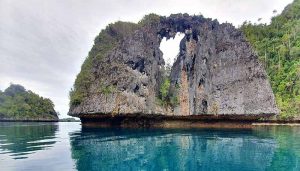 With our departure from the Islands of Misool looming, we combined our normal two outings and set off on a walk and paddle session through the maze of the thousand temple islands. After a short paddle, we made our way slowly up the path to the summit of “Pucak Cinta” (Indonesian for “Love peak”) and were greeted by stunning views over the islands including a lagoon that was unmistakably shaped like a love heart. Paddling on, we entered the maze and paddled through shallow channels to a tidal beach beside a lagoon. We snorkeled until the tide took our beach away then again wound our way through the islands, past ancient illustrations on the rock face and back to the boat. After nearly a week in the Islands of Misool, no one was ready to leave and yet more adventures awaited in the north. 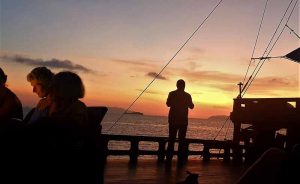 After our night transit to the shores of Gam, we woke to the relative bustle of the north. While the divers dove, the kayakers found some secret lagoons in the mangroves then parked themselves on a beach to snorkel the famous Jangello point. For our afternoon adventure we steamed a little further to the north to the entrance to Hidden Bay, a network of passages and islands accessed through a camouflaged entrance in the mangroves. The current, flowing into hidden bay, made for an easy paddle and we drifted for the first few hundred meters. Paddling deep into the bay, we entered an enclosed lagoon through a tidal archway where most chose to abandon their kayaks and bob like jellyfish in the heat of the afternoon. The current was still running quickly on the way out and we had to move between a series of eddies to get free of the lagoon. Back aboard, we settled into our deckchairs and watched the sun set over the island of Gam.

We began our day with a paddle into Mangrove Bay, a bay full of seagrass beds which is known to be visited by dugongs. Despite our stealthy stalking, the dugongs were not to be found (the ripples turned out to be a large fish) so after an exciting paddle though an arch we found a small beach and played frisbee in the shallows. After refreshments back onboard, the next stop was Freewin wall for a spectacular snorkel and then dive for the divers. We finished off the day with another stunning paddle amongst the limestone islands on the shores of Gam before an early night in preparation for our pre-dawn outing to find the birds of paradise. 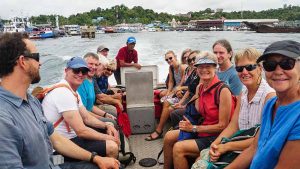 We were up before the sun and after the crew expertly navigated their way through the reefs by torchlight, we met our local guide. Arriving on the beach, we walked slowly by torchlight as the forest came to life with the first trace of the sun’s rays. We sat quietly as a male Cendrawasi Mera (red bird of paradise) began his morning call from the tree tops. Soon after he was joined by a second male eager to attract a female. As the sun rose, we watched them flit between the treetop hoping in vain to attract a female. Eventually it was time to descend and we made our way back to the boat for a delicious pancake breakfast. As we napped or relaxed onboard, the ship re-located to a unique snorkeling site in Kabui bay. The small island dubbed “Nemo Island” due to the proliferation of clown fish did not disappoint and no one could quite keep count of the number of clownfish. Moving further to the north in Kabui bay, we used our kayaks to explore the many bays and lagoons hidden amongst the towering limestone islands.  In one lagoon we came across a passage that we paddled for a couple of hundred of meters before the bats and lack of light turned us back. It continued on into the cliffs, destination unknown. Then, not far away, we paddled through a cave of over a hundred meters, only accessible when the tide is right, into an extensive lagoon system. The opportunities for exploration and adventure seemed endless. Back on board the crew had been working hard and had set up dinner on deck. We dined alfresco, as the sun set and we turned our bow to the south. 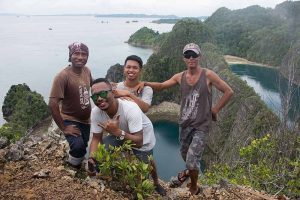 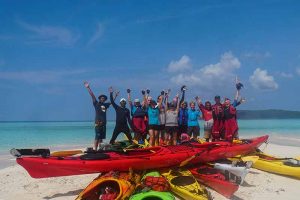 We made the most of our final day in the islands. The divers were in the water before breakfast and not long after the paddlers were headed for a tiny speck of sand near the Island of Kri. We landed amongst a muddle of wavelets, dragged our kayaks onto the sand and dropped into the extensive shallow clear waters. As a celebration of our last paddling outing for the trip, we were treated to fresh cut fruit and iced drinks served in the water. Our last stop in the islands was in the village of Sauwandarek. After a stroll through the village and a little souvenir shopping for some, the group took the time to explore. Some snorkeled amongst thousands of fish in the fish sanctuary in front of the village, others played Frisbee on the beach with the local kids while some simply sat under the shade of the trees and watched the world go by with the locals. It was a lovely insight to the enviable lifestyle of the people of Raja Ampat. All too soon it was time to depart and we beganour overnight journey back to Sorong and beyond.

After a scrumptious final breakfast and ample time to pack, we were transported by the speedboat directly to our waiting taxies and on to the airport or local hotel.