I have recently viewed various photos of friends ski trips all over the world. From Traverses in Europe to the backcountry of whistler, from off piste skiing in Japan to the slack country of the States.  What caught my attention about all these trips were the number of “others” in the backgrounds of all of these photos. Crowds, sometimes even hordes of people skiing in the same places. I found it hard not to cringe at the hard packed snow, moguls, and tracked snow in all the photo. I began to wonder about what “adventure” had become.

I feel incredibly fortunate that my last ski trip was in a place where there were no “others” in the background of the trip. There were only seven of us in the group, and we saw and heard no one else, in fact, nothing else, for the week we were there. We didn’t cross a single track, the glaciers and slopes were a blank canvas for our skis.

This place was East Greenland. The modern world seemed to slip away with each leg of our journey. 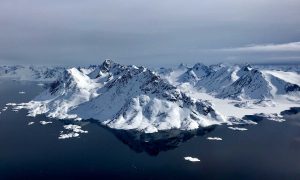 As we crossed the Greenlandic Sea from Iceland to Greenland layers of the modern world were washed away. As we approached the Greenlandic coast, its desolate, snow capped peaks spoke of a harsh environment, surrounded by miles of sea ice separating this Island from the rest of the world. We landed on a gravel landing strip, and a backhoe brought our gear to the front of the airport.

As we stepped off the plane Siggi greeted us. He would soon become an invaluable part of our trip. We loaded our bags on two toboggans towed by snowmobiles, and headed off onto the sea ice, towards an open patch of water where Siggi’s boat was “docked” into the ice. With a small crane, he loaded all our gear, the two toboggans and two sleds onto his boat, and off we motored- North to a small Greenlandic town. We were surrounded by calm water, 1000m snow covered mountains that rose straight out of the sea.

We were soon in a small village, being followed by a group of local children. They helped us drag our heavy packs into a small hut, they helped us shovel out the entrance and generally entertained us with their antics! Soon enough we were repacking all our bags for the next leg of our journey. The children grew bored as we obsess about what to put where, what to leave behind and what to take.

The next day dawned cold and bright, the arctic air cleanand crisp. We heard a faint sound that grew louder and louder; the barking and howling of many dogs. Over the horizon appeared three dog sled teams that rapidly came closer. This was to be another step back in time, as we loaded our bags onto the snowmobiles, they went ahead to pack the track for the dogs. We jumped onto the dog sleds, two people per team. The first musher in the line called out a command and the dogs surged forward-yelping and howling for the joy of the trail ahead. This is truly one of the most amazing ways to travel. All that could be heard was the steady breathing of the dogs, the skis of the sled as they glided over the snow, and the occasional command from the musher. The ride was smooth and the views were stunning. We headed up a wide valley surrounded by 1500 meter peaks. Deep snow all around created a backdrop that looked like a black and white photo. As we went further north, we encountered glaciers with blue ice seracs and huge blue ice caves. 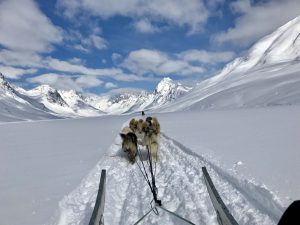 The steady rhythm of the dogs put a few members to sleep, while the rest of us were lulled into the peace and quiet of a world that was not the hustle and bustle of our regular work lives.

After six hours on the dog sleds, we came to the crux of our day. The last 3 kilometers for the day were attaining a col on a glacier to gain the shoulder where the Hut is located. The dog sleds dropped us off at the bottom of the col, and turned around to make the return journey home. One of our guides, Matt, went ahead with the snowmobiles to see if they could attain the col, navigate the crevasse field, and get our bags to the summit. After multiple attempts and a typical Greenlandic attitude towards crevasses that made our skin crawl-they were able to get all our bags to the hut. We donned our ski touring gear, and Matt made his way back down to guide us up and through the crevasse field. We roped up for the ascent, many of us new to harnesses and ropes. For an hour and a half we manoeuvred through a Crevasse field without mishap, and around the corner we could see our home for the next week. The sight gave everyone an extra boost, and we covered the final distance quickly.

The little red hut, our home for the week, supplied us with everything we needed while in the potentially hostile arctic environment. Propane cooking stoves, a diesel fired heater, common area and sleeping area were all we needed. The guides spent the evening organizing the food and equipment, shovelling out the hut entrances, and cooking, while we laid out our sleeping bags and organized our personal gear. We sat down to a hearty, delicious meal, complete with appetizers, main meal and dessert. Sleep came quickly after a long day of travel. 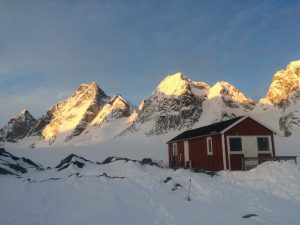 We had five days of mostly blue skis, enabling us to ski everyday and explore the area around the hut. Everywhere we looked, steep couloirs and expansive glaciers could be seen. The peaks surrounding our hut were a mountaineers dream. They were steep, jagged and raw rock rising 2000m from the sea. Our first day we eased into the area and the conditions and skied an open 30 degree slope. Conditions felt solid and we upped the ante for our second run of the day. We roped up for a crossing of a snow bridge over a Bergschrund and boot packed up a steep couloir. The last few steps to the top required ice axes, and after a few challenging steps, we each reached the summit. We could see the ocean to the East and Ocean to the West, with miles and miles of jagged, rocky peaks between. We couldn’t help ourselves as we threw our hands in the air and yelled out in excitement over everything! The view, the limitless skiing, the adventure of the boot back up and the ski run to come. One at a time we skied down the couloir, revelling in the steep, powder skiing. Walking back towards the hut we watched as the sky went from blue to pink to fiery orange as the sun set on our vast ski playground. Sipping beverages of choice, we sat on the hut deck and revelled in alpine glow on the cirque of peaks surrounding us.

Each day we ventured further from the hut, exploring new couloirs, new glaciers and new valleys. We could see tidewater glaciers in the not too far distance, massive seracs breaking into the crisp blue ocean waters. We toured past blue ice crevasses, sparkling in the sun and running deep into the glaciers beneath our skis. We roped up through a section of complex glacier that created a ramp towards towering cliffs that formed a half circle around us. We walked over thick bridges with massive crevasses on either side, a feeling of humility wrapped itself around us as we continued to tour towards the giant rock faces. We came to a bergschrund that was impassable and decided that was our turnaround point. We took a few minutes to let the vastness of the place soak into our soul’s, and then followed closely the guides ski tracks down through the glacier. Once again, we toured home towards the setting sun watching the alpine glow light up the cliff faces all around. 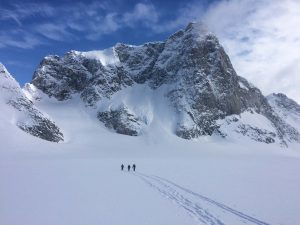 Our last full day of the trip dawned with ferocious energy. I was glad the hut was secured to the rock with thick cable, as the winds howled down the glacier with uninterrupted force. Visibility was pretty poor as well so most people opted to stay in the warmth and comfort of the hut, playing card games, reading books and telling stories. Three brave souls headed out for a few laps not far from the hut. We were buffeted by the wind, our faces scoured by the snow, and our eyes sore from searching through the white for any depth perception. It took three laps to expend the energy we needed, and we gladly headed back to the hut for warmth and comfort, hot soup and drinks.

We fell asleep that night wondering if the weather would break to allow our helicopter pickup. The wind continued to buffet the hut all night long, and any pee breaks during the night were an unpleasant endeavour. In the wee hours of the morning the wind started to die down. Early morning found the sun breaking through the clouds and by mid morning, our heli pilot was contacting us on the radio.

With conflicting emotions, we began the journey back into the modern world, holding onto the memories of solitude, silence, and perfect untracked powder.