The Weather Gods Had Other Plans 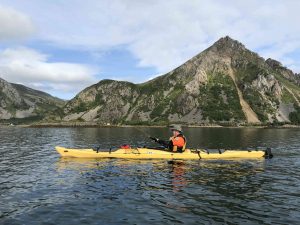 I was right. The last sunny, calm day dawned bright and early the day before the trip began.  The weather forecast was calling for strong winds, continuing to increase in strength over the next few days.  There was only one thing that could be done, alter the itinerary, explore the Viking culture of the Lofoten Islands, and hope for the best! 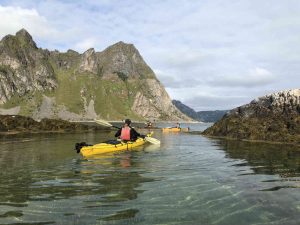 Our paddling team was made up of seven people. Everyone had an adventurous spirit, embraced flexibility, and got along so well as a team that nothing fazed them.  Our first day’s itinerary change allowed us to paddle our longest day with the best weather. We all revelled in this day, knowing that tomorrow the storm would hit the coast, keeping us land locked for at least two days.  We soaked up the sun, we marvelled at the dramatic, granite mountains, and enjoyed the calm seas of the day. Coming around the corner of a series of Islands, we disrupted a sea eagle who took flight-showing off his beautiful feathers and massive wing span. 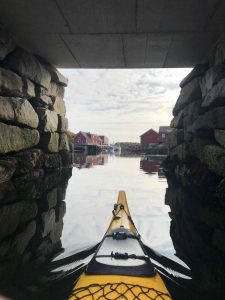 The day was long, but we luxuriated in every paddle stroke. We soon came to our first village for the night, Stamsund. We paddled under a small bridge and into an incredibly protected harbour, with the smell of fish on the air, we grew excited to rest our bodies, shower, eat out, and enjoy a soft bed.

Throughout the night the winds howled and the rains poured from the heavens! We were all snug as bugs in a rug, as we knew that we would be staying in Stamsund for three nights to sit out the storm. But our itinerary was still full of adventures to be had. The morning dawned dark and ominous. The winds continued to howl and the rains continued to fall. We hoped into a seven passenger van and headed to the Lofotr Viking Museum. This is the most comprehensive Viking museum in Norway. In 1980, a farmer was ploughing his field and realized he was turning up artifacts. He had just discovered the largest Viking longhouse, but it was home to a mighty chieftan and many new things were discovered about the Viking era due to this archaeological find.  This is one of the most amazing Museums’ I have ever been to. We spent hours going through the well thought out Museum, visiting the re-built long house, visiting the dock that houses a Viking ship, and trying our hand at archery – in the pouring rain!

The next day we were able to go for an afternoon paddle in a protected harbour out of the wind. It was great to be back in our boats, exploring the nooks and crannies of the Stamsund area.

We continued our journey down the coast the next day, as the winds were continuing to abate. We started the day  paddling along the shoreline to avoid the wind, and by noon, the winds had nearly calmed. The sea conditions continued to keep us on our toes as the swell and come up with the storm, but it provided a really fun paddle in the afternoon. We paddled below a massive granite mountain, through some really cool rocky islands, and had one final crossing before Ballstad emerged on the distant shoreline.

The accommodation in the Lofoten’s is all in Rorbu’s. In the 1680’s, king Oystein decreed that small fishing huts be built all along the Lofoten Islands Archipelago, to provide a safe sleeping haven for the fishermen. The whole of the Lofoten’s is built on the Cod fishery, which sees millions of cod migrate past the islands in February to April.  Since the advent of fishing boats that are comfortable enough to sleep on, these Rorbu didn’t have a modern function anymore. So they have all recently been turned into guesthouse accommodation. They are beautiful structures, that are a welcome sight to any kayaker after a long day on the water. 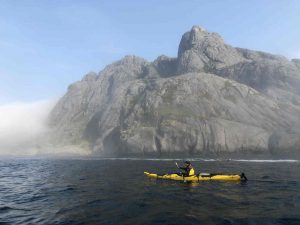 Everyone went to bed that night wondering what sort of weather we would wake to. The locals were saying strong winds were coming, the forecast said calm seas. We  were all happily surprised to wake up to dead calm weather.  We had a luxurious breakfast of pancakes, syrup, fruit, and specialty coffees, and made our way down to our trusty boats to pack for the morning. One interesting part of this particular trip, is that because all the harbours are accessible for fishing boats, there are no boat ramps or beaches nearby. So we became very adept at loading and unloading our gear and ourselves from the low docks.

The morning was incredibly calm as we set out through the safe harbour and out into exposed waters. The swell had died down quite a bit, and each paddle stroke felt efficient, and buttery. The further we paddled down the coast, the more dramatic the coastline. We were paddling below 800 m Granite cliffs that rise dramatically from the ocean. As we rounded the next corner, we encountered dense fog-just in time for our crossing for the day! But the view was so dramatic, as granite peaks poked out from the top of the fog, and we headed directly into it. For 45 min we followed a compass bearing as the fog was so dense we could only see 20ft in front of our kayaks. Paddling through the fog heightens every other sense in your body. The motion of the swell rolling beneath your kayak is accentuated, the breeze on our faces was vivid, every sound seemed many decibels louder than normal.  It was an amazing 45 min crossing, that ended as we came to the far shoreline. Our home for the night was Nusfjord, a small, but dramatic fjord along the equally dramatic coastline. The entrance to the harbour is not large, and the fog grew even more thick as we neared the entrance. It felt like we were going through a magical curtain, as soon as we crossed the narrowest part of the entrance, the fog gave way to intense sunlight and one of the most beautiful views we had seen yet. Nusjford. Small, quaint village of all red Rorbu’s, nestled amongst 800 m high granite cliffs. 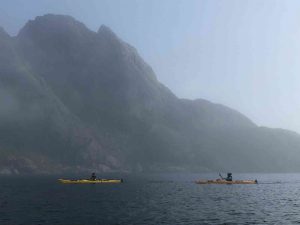 We had the afternoon to explore this little historic village, enjoy fresh waffles and hot chocolate. The Men Folk even went for a quick swim in the arctic waters! We all gathered together for the evening meal and recounted the amazing day paddling in the fog!

Our final two nights were spent in Reine. A town at the mouth of three connecting Fiords, attached to the main islands by elven like, white graceful bridges.  We went for an early morning paddle into one of these Fiords, and discovered a hidden lagoon, with an equally hidden lake encircled by 800 m Granite mountains. The scene was so spectacular it was difficult to know where to look.

So, despite the foreboding weather, it was one of the most amazing Lofoten trips I have done. The weather created a dynamic, striking contrast to the trip that made us revel in each window of weather we had. The group gelled so well together and we had so much fun throughout the trip as being flexible often leads to some pretty amazing experiences.